When the Naga Visited West Trenton


West Trenton is an unincorporated neighborhood in the township of Ewing, Mercer County, New Jersey. Called Birmingham at the time of the American Revolution (George Washington divided his troops in the heart of town on his way to the Battle of Trenton), it was later known as Trenton Junction, thanks to the arrival of the trains in the 1870s. It held this name until the early 1930s when it was renamed West Trenton, the name it carries today.

At the turn of the century, Trenton Junction was a semi-isolated hamlet of farmland, country houses, and a few dirt roads. You could catch a train to Philadelphia or New York or even into Trenton and, after some wrangling, a trolley service came into the village from downtown Trenton.

In 1905, Trenton Junction had a most exotic visitor, from far away Nagaland, a province found in the jewel of the British Empire's crown, India.

Located in the northeastern corner of the country, Nagaland borders Burma (Myanmar) and it is one of modern India's smallest states. Surrounded by Hinduism and Buddhism, it is mostly (88%) Christian (Baptist, specifically).

Around 1887, a boy named Eramo Shanjamo Jungi was born in Nagaland. He was of the Lotha tribe and in 1905 he became the first Naga to come to the United States and receive a foreign education.

Mrs. S.A. Parrine was the wife of a Baptist minister and the daughter of Rev. and Mrs. M.T. Lamb of Grand Avenue, Trenton Junction. She and her husband were missionaries to Nagaland. On December 27, 1904 they brought Shanjamo to the United States. He spent 1905 living with her parents, the  Lambs, in their farmhouse on Grand Avenue and he spent the school year studying at the Trenton Junction public school, just down the road. On October 27, 1905, the Rev. Judson Conklin, of the Clinton Avenue Baptist Church in Trenton, arranged to have Shanjamo lecture about his home. Mrs. Parrine interpreted for him.

The following year, Sanjamo transferred to a school in Port Norris and finally, in 1907, he transferred to the Mt. Hermon School in Warren County. He returned to Nagaland on November 27, 1908. He was very active in the Baptist Church in India, was ordained, established churches and preached at many churches throughout Nagaland. He died in 1956.

Today in Nagaland, there is a monument to Eramo Shanjamo Jungi, highlighting the fact that he was the first of his people to receive a foreign education. On the monument is a plaque with his photograph and a list of all of his accomplishments in life and as a Baptist minister and missionary. Listed under his education is the little two-room schoolhouse 7,802 miles away, on Grand Avenue, in Trenton Junction.

I wrote the preceding paragraphs on my blog in 2016 and later adapted them for my book, One Square Mile: A History of Trenton Junction New Jersey. (iUniverse, 2017). And then I forgot about Shanjamo and Nagaland.

They remained forgotten by me until the day after Thanksgiving 2019. Early in the morning of Black Friday, I received a Facebook message from someone in India named Dorothy asking to get in touch with me. I naturally assumed it was yet another scam so I immediately blocked her. I don’t know anyone in India and Dorothy doesn’t sound like an Indian name. After I blocked her, I thought I’d read more of what she wrote and then Google it to see what others were saying about this scam. As I read her message, I realized that it wasn’t a scam. Actually, it was Dorothy’s aunt, Jan Nienu, who wanted to contact me. Jan is also from Nagaland and she now lives in Oakland, California. She recently published the first biography of Shanjamo Jungi. Jan wanted to contact me because she had read my book, One Square Mile. Curious, I immediately unblocked Dorothy and messaged her back saying that yes, of course, her aunt could contact me. After a short period of difficulty getting emails to work, we made contact.

Jan explained to me that she came to New Jersey earlier in the year to retrace the steps of Shanjamo and gather information for her biography. While here, she tried to find Trenton Junction, but to no avail. Not knowing that the village had changed its name in 1931 to West Trenton, she assumed it no longer existed and gave up. She was very disappointed knowing she was going to have to leave a gap in Shanjamo’s story, especially since Trenton Junction was his first stop in this country.

Jan went on to explain that it was her niece in Nagaland who discovered my book online. Both Dorothy and Jan were stunned to see that someone wrote about Trenton Junction and mentioned Shanjamo Jungi. That’s when she had Dorothy reach out to me, all the way from India. You can imagine Jan’s further surprise (and excitement) when I explained that yes, Trenton Junction still exists, just under a new name, as does the old schoolhouse, and the farmhouse where Shanjamo once lived. She found the missing piece to her puzzle!

The two-room Trenton Junction schoolhouse, I explained, burned in 1916. Shortly thereafter, my paternal grandfather, Vincenzo Falzini, bought the building and converted it into a two-family house. My family owned the house from 1916 until 1983 when it was sold after my grandmother passed away.

I told Jan that I would be more than willing to show her around West Trenton and in particular the old school and farmhouse. Before I knew it, Jan and her good friend Takio flew in from Oakland. We spent the weekend touring West Trenton (which took all of 10 minutes…it is, honestly, just one square mile) taking photos and copious notes. I also took them to see the Clinton Avenue Baptist Church in Trenton where Rev. Conklin arranged for Shanjamo to lecture. Once again Jan was shocked to learn of my personal connection to the story: Rev. Conklin had married my maternal grandparents in 1927 and my family attended Clinton Avenue Baptist Church from the early 1920s until it closed its doors in 1969.

It was a whirlwind visit, and Jan tried to take in all that I was showing her and telling her about Trenton Junction at the time of Shanjamo’s visit. One hundred and fifteen years after Shanjamo Jungi’s visit, the second exotic visitor to Trenton Junction from Nagaland left here with a camera full of photos, a notebook full of notes, and a suitcase full of a newly discovered local delicacy – pork roll! 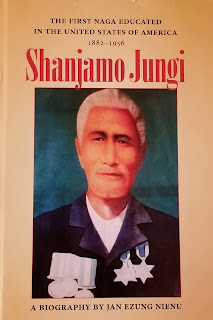