The history of the United States’ manned space program did not begin with the Freedom Seven astronauts of the 1950s. It actually began in the early part of the 20th century and consisted solely of manned balloon flights into the stratosphere. 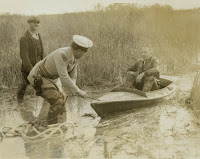 Recently, photographs were purchased on eBay showing a New Jersey State Trooper helping to pull two men out of a swamp. Further investigation showed that they are photographs of the recovery of two balloonists after their stratosphere balloon flight of November 20, 1933.

Major Chester L. Fordney (USMC) and Lieutenant Commander T.G.W. (“Tex”) Settle (USN) launched their balloon in Akron, Ohio where they reached the stratosphere at an altitude of 61,237 feet (18,665 meters). The balloon was so high that it was able to drift to Bridgeton, New Jersey, where it landed later that same day. They were “rescued” by the New Jersey State Police the following day – they spent the night in a swamp because they had lost their radio equipment after making the first live transmission from the stratosphere.

Thomas G.W. Settle, an officer in the United States Navy, was a noted balloonist. In May 1929, Lieutenant Settle and Ensign W. Bushnell won the Litchfield Trophy and qualified for the International Race held the following year as well as establishing world distance records for balloons in three categories with a flight of 952 miles.

On July 19-20, 1931, Lieutenant T.G.W. Settle and Lieutenant J.G. W. Bushnell piloted a Navy balloon and again won the Litchfield Trophy and the National Elimination Balloon Race at Akron, Ohio, with a distance of 195 miles to Marilla, New York. This again qualified them for the International Race.

On September 25-27, 1932, Lieutenant Settle and Lieutenant Bushnell won the International Balloon Race in Basel, Switzerland, in a flight that ended on the Polish-Latvian border near Vilna. This flight established a new world distance record of 963.123 miles for balloons in three categories of volume.

On September 2-4, 1933, the Navy balloon of now Lieutenant Commander T.G.W. Settle and Lieutenant C.H. Kendall took second place in the Gordon Bennett International Balloon Race held at Chicago with a distance of 776 miles in 51 hours in the air. This time they set new world records for duration in three categories of volume.

November 20, 1933 was Lieutenant Commander Settle and Major Chester L. Fordney’s famous flight. Taking leave from the military, Settle and Fordney launched in Akron, Ohio and sailed into the stratosphere in a round metal gondola seven feet in diameter that was attached to a 600,000 cubic foot hydrogen filled balloon. They took with them several scientific instruments for measuring cosmic rays and a radio to communicate with the ground. “One of the main objectives [of the flight] was to study cosmic rays in the stratospheric regions 10 miles above the earth.”

The flight reached an altitude of 61,237 feet – just 1083 feet shy of the altitude record set by the Soviet Union – and reached 55 miles per hour as they were carried eastward towards the coast. At one point, as the balloon began to quickly lose altitude, Commander Settles informed Major Fordney that he might have to parachute overboard as ballast, but fortunately this was not necessary and Major Fordney remained in the gondola.

The balloon eventually landed at 5:50 P.M. in a swamp just outside Bridgeton, New Jersey. Because it was not certain just where the balloon would land, a coast guard plane and cutters were ordered to prepare for a search in the ocean. Meanwhile, every town in southwestern New Jersey had been contacted by telephone by the State Police. State Troopers, residents and newspapermen “searched the roads and penetrated the woods” for the balloonists, who had lost their radio. They were finally recovered, safe and sound, the following day and were pulled out of the swamp in a kayak.

The following year, on October 1, 1934, Lieutenant Commander Settle was commanding the US gunboat Palos on the Yangtze River in China on its final voyage to dry-dock. In April 1961 he published an article called “Last Cruise of the Palos” in SHIPMATE magazine. He was Captain of the USS Portland, serving in the Left Flank Forces under Rear Admiral J.B. Oldendorf in Cruiser Division 4 during the battle of Surigao Straight on October 25, 1944.

Then, on August 16, 1945, the Northampton Class heavy cruiser, Louisville sailed for Guam and Darien, Manchuria with Rear Admiral Settle on board. At Darien, the ship supervised the evacuation of Allied POWs before continuing on to Tsingtao where Vice Admiral Kaneko surrendered the Japanese ships. The Louisville escorted the surrendered vessels to Jinsen, Korea before returning to China. After the war, Rear Admiral T.G.W. Settle was assigned as Commander of the Naval Air Station at Lakehurst, New Jersey.

Accompanying Lieutenant Commander Settle on the famous stratosphere flight was Major Chester L. Fordney, USM. Chester Lawrence Fordney was born on June 16, 1892 in Saginaw, Michigan the son of a life-long lumberman. After graduating from the University of Michigan in 1917, he enlisted in the Marine Corps and served overseas with the Naval Air Forces. After the war, then First Lieutenant Fordney was stationed in Santo Domingo and Haiti. It was while he was stationed in Santo Domingo that on April 26, 1919 he married Dorothy Nelson Fuller.

Major Fordney accompanied Lieutenant Commander Thomas “Tex” Settle on the 1933 flight into the stratosphere as a scientific observer. While aloft, he performed spectrograph analysis and studied cosmic rays. In 1934 and 1935 he published two feature articles in Collier’s Weekly entitled “Up Above the World So High” in which he provided a “vivid and graphic story of their flight to the stratosphere and their sensational descent.”

During the 1939 World’s Fair in New York, Major Fordney was appointed as executive of the Navy Unit’s Mathematical Exhibit in the Hall of Science of a Century of Progress.

Fordney was eventually promoted to Colonel and served as the Chicago recruiting director for the United States Marine Corps. After his retirement, it is believed that he became warden of the Cook County Jail in Chicago, as there is mention of a “Chester L. Fordney” as warden in 1949.

Colonel Fordney died on May 26, 1959 in Washington, DC and is buried in Arlington National Cemetery.