Crime of Choice: The Threatened Kidnapping of Senator Dryden Kuser 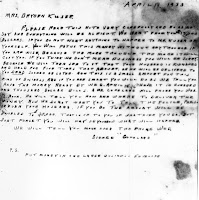 During the Great Depression, the crime of choice was kidnapping. In 1932, the most famous kidnapping in American history took place when the son of Charles and Anne Morrow Lindbergh was taken from their home in Hopewell, New Jersey. The resulting police investigation, international manhunts and world-wide media frenzy made this the crime, and later, the trial of the century.

A year after the kidnapping of the Lindbergh Baby, on the evening of April 24, 1933, a maid in the employ of Mr. and Mrs. J. Dryden Kuser handed her mistress a letter that had just been collected at the post office by Anthony Gallo, the Kuser’s chauffeur. The letter, dated April 19, 1933 and addressed to Mrs. Kuser, demanded $12,000 be paid or else her husband would be “...kidnapped and held for five times that amount or he will be delivered.... DEAD.” The note, which was mailed in Somerville, New Jersey, on April 23, instructed her to have the money ready by Wednesday, April 26. The money, which the author of the note claimed “...is a small amount for this kind of business”, was to be in hundred and thousand dollar bills. Mrs. Kuser was then to wait for a Mr. Copeland to phone her on Wednesday at noon with instructions on how and when to deliver the money. The author requested in a postscript that the money be sealed in a large business envelope.

John Dryden Kuser was the son of Colonel Anthony Kuser and Susan “Susie” Dryden. he was born on September 24, 1899. His mother was the daughter of John F. Dryden, a United States senator and founder of the Prudential Insurance Company. His father, who financed William Fox in the formation of the Fox Film Corporation, was the president of the South Jersey Gas and Electric Lighting Company and the founder of the New Jersey Audubon Society.

Dryden, as John Kuser was known, had been the Vice President of the Lenox China Company before becoming a state senator. He was first married to Brooke Russell, who later divorced him and married into the Astor family. He then married Vivia Marie Fischer, the recipient of the threatening letter.

Quite expectedly, Vivia Kuser became very much excited over the content of the note she received and immediately phoned her husband telling him to come home from work. In the meantime, a call was placed to the State Police.

The New Jersey State Police Morristown Headquarters received the phone call at 9:38 in the evening. Sergeant Louis Kubler and a Trooper were immediately dispatched to the Kuser home in Bernardsville to investigate. While Sergeant Kubler examined the letter for fingerprints, the Trooper remained on guard at the home.

By the next morning, April 25, a plain-clothed Trooper was sent to the Kuser home to keep watch. Captain William Nicol and Sergeant August Albrecht met with Senator and Mrs. Kuser to discuss possible suspects and the procedure that would be followed during the investigation. They then left, accompanied by the senator, for the Prosecutor’s office in Somerville. The Kuser letter was compared with other threatening letters on file in the office, but no match was found. Later, a revolver and permit were issued to the senator.

The following day was the day Mr. Copeland was to telephone Mrs. Kuser at noon with instructions for delivering the money. Around 11:00 that morning, Sergeant Albrecht arrived at the Kuser home where he was informed that nothing suspicious had occurred during the night watch.

Meanwhile, Captain Nicol dispatched Troopers, in civilian clothes, to various telephone exchanges to cover any telephone calls coming through for the Kuser residence. Detective Joseph Meade met with two Troopers and instructed them to cover the telephone exchanges at Bound Brook and Peapack. He also went to the Plainfield Police Headquarters and enlisted the aid of Sergeant Baker who said that someone would be at the Plainfield exchange to monitor calls. Detective Meade then went to the Bernardsville Police Headquarters where he met with the local Constable, Clyde Wolfe. Together, they went to the Bernardsville telephone exchange and waited for the call to be made.

The Trooper arrived at Bound Brook telephone exchange at 10:50 that morning, consulted with the chief operator, and informed her of his mission. She, in turn, instructed all of the operators to be on alert for a telephone call being made to the Kuser home at “Bernardsville 272" or “276". He waited at the exchange 1:35 that afternoon. However, no calls came through. Before returning to the Berkeley Heights Sub-Station, the chief operator told him that she would continue to have her operators on alert and if a call should go through, a notation of its place of origin would be made.

The next day, the telephone rang at the Kuser home. The butler answered the phone as instructed and advised the caller that he would call Mrs. Kuser to the phone. He gave the phone to Sergeant Albrecht and Mrs. Kuser answered from the upstairs extension. “Hello?” “This is Copeland”, came the reply.

Sergeant Kubler and a Trooper had been detailed to the Bell Telephone Company’s office at Somerville. Sometime between 12:06 and 12:12 p.m., Miss Myrtle Snyder, one of the telephone operators on duty, received a call for “Bernardsville 272" – the Kuser home. The call was traced to “Somerville 1945", a payphone located at Frank Yurek’s Candy Store, 10 East Somerset Street in Raritan. Immediately, the Troopers who were stationed at the Raritan Police Station and the Bell Telephone office were ordered to proceed to the store and apprehend the person making the call. They arrived and found Mr. George Sabol still on the phone talking to Mrs. Kuser.

As a Trooper approached the front of the telephone booth, Sabol stopped in mid-sentence and hung-up the phone. The Trooper immediately called Miss Snyder, the operator, and asked whether the man who just hung up the telephone was the man who was speaking to Mrs. Kuser. She informed him that Sabol had indeed just telephoned the Kuser home and that he had only been talking to Mrs. Kuser for about 10 seconds before the Trooper called her on the phone. She also informed him that the man who had just hung up the phone was the same man that called the Kuser’s that noon.

George Sabol, a single 28 year-old from Raritan, was placed under arrest and taken to the Bernardsville Police Headquarters for questioning. Sergeant Albrecht searched him and a receipt was found in his shirt pocket. The receipt was for a “Copeland” refrigerator. Sabol was questioned and he denied having any connection with the crime. He was then taken to the Somerville State Police Station for further questioning where, in the presence of the Prosecutor, he made a complete confession.

Sabol was born in Providence, Rhode Island, moving to Raritan in 1915. He had worked for three years as a stock clerk for the New Jersey Tobacco Company in Somerville. Having been unemployed five months previous, he said he had “...been broke since about the first of February.” When asked what his reasons were for writing the letter, he simply replied, “I needed money.” He chose to write to Mrs. Kuser because “...she was a woman and would be easier and if I sent it to Mr. Kuser he would not pay any attention to it.” If she refused to meet his demands, Sabol “...was going to let it go. When I started to phone, I just couldn’t go through with it.”

George Sabol’s ordeal began on April 11, 1933 when he wrote the letter to Mrs. Kuser, thinking that it would be one way of getting money. He borrowed stationary from his sister and put the letter in his pocket, carrying it around with him, trying to muster up the courage to send it. “I carried it in my pocket until Sunday, April 23rd...I was going to the bus terminal and I dropped it in the mail box on Division Street [in] Somerville.” Before doing so, he changed the date of the letter from the 11th to the 19th and the date of the phone call from the 12th to the 26th. To make the phone call, he borrowed a dollar from his sister on the previous Sunday.

George Sabol appeared before Judge Reger of the Special Sessions Court of Somerset County where he pled guilty. On May 12, 1933, he was sentenced to “not less than 18 months or more than 2 years 6 months” in State Prison.

At 9:30 in the morning of July 3, 1933, Senator J. Dryden Kuser phoned the Morristown Headquarters of the New Jersey State Police. He was requesting that Troopers visit him at his Bernardsville home regarding a new threatening letter he had just received.

Sergeant Albrecht and Detective Meade drove out to the Senator’s home where they were shown a letter post marked “New Brunswick Jul 1 6PM 1933.” The letter and envelope were both printed using a black crayon. The letter read:

Cuser,
So you think is all gone and forgotten hey may be
we are too poor
to revenga you senda the boy to jail
we senda you to hell You wife no save
you this time
We send back your head to her no fone next time see
REVENGA

The Troopers took the letter and envelope back to the Troop Headquarters where they were processed for fingerprints. A confidential look-up was then arranged of the names and addresses of George Sabol’s relatives. Later, they proceeded to the Prosecutor’s office in Somerville where the Kuser letter was compared to other threatening letters on file. No matching comparison was found.

The “July letter” was received only two months after the arrest and conviction of Geroge Sabol. Because of this, it became the opinion of the State Police investigator that either a relative of Sabol or a crank had written the letter in an attempt to influence Senator Kuser with regards to Sabol’s sentencing. Sergeant Albrecht recommended that the case be closed “...due to the limitation of prosecution.” Captain Will Nicol concurred with this recommendation and the case was closed.