On the morning of March 2, 1932, the world awoke to the news that their baby – the world’s baby – Charles Lindbergh Jr., had been kidnapped the previous evening.  A global search for the missing toddler ensued.  Reporters demanded photographs and an accurate description of the Little Eaglet.  They were told he had “yellow curls clustered in thick mass over the little lost baby’s head…”[1]
The description, however, was not quite accurate.  According to Laura Vitray, a reporter covering the story, “not until several days later did an Englewood, New Jersey hairdresser assure a New York newspaper woman she had clipped the Eaglet’s curls from his head herself, only a couple of days before the kidnapping, in the presence of Anne Lindbergh.  ‘The mother said she did not want her baby to be a sissy’, the hairdresser is reported to have explained.”[2]
Who was this mysterious “Englewood, New Jersey hairdresser”?  She has never been named in any publication about the Lindbergh Case nor is she mentioned in any of the police investigation files.  However, in the Anne Morrow Lindbergh Papers at Yale University there is an envelope labeled by Elizabeth Morrow, the toddler’s grandmother.  It reads: “The baby’s hair.  Little Charles’ hair.  Cut in my room by Mrs. Scholtz possibly February 23 1932.”
Erna Genevieve Scholtz was born on June 7, 1900 in Munich, Germany.  Standing just five-and-a-half feet tall with blond hair and blue eyes, she married young, just seventeen years old.  Her son, Eugen (later Americanized as Eugene) came along a year later, on December 10, 1918, also in Munich, just one month after the Armistice was signed.  It is not known what happened to her first husband, but in 1926, she married again, this time to Werner Scholtz, the son of Konrad Scholtz of Poppenbuttel, a town near Hamburg.  Born in 1894, Werner stood at 5 feet 10 inches tall with a fair complexion, with blond hair and blue eyes.  He was employed as a clerk.
With the post-war German economy in shambles, Werner and Erna decided to try their luck in America.  On December 10, 1927, they set sail from Bremen on the DRESDEN.  When they arrived in New York ten days later, their friend, Ella Weidlich, met them.
Werner and Erna eventually made their way from New York to Englewood, New Jersey.  They lived at 178 John Street with Erna’s son Eugene who had immigrated to the United States in 1929 and whom Werner had adopted as his stepson.  By 1930, Werner was working as a merchant in the food industry and Erna was a hairdresser in a local beauty shop.  They rented their home for $50 a month from Thomas Dowd, who also lived at that address with his wife, four children and their maid.  By 1932, they had moved to 910 Grand Avenue, the southern extension of Engle Street.
On May 28, 1932, three months after his wife had cut the Lindbergh baby’s hair, Werner went back to Germany, returning to the United States by way of Liverpool, England on July 3rd.  It is not known why he went to back to Germany at this time, but he went alone.
Three years later, in 1935, Erna was still living in Englewood.  But sometime between his return from Germany and 1940, Werner died.  The widowed Erna moved to 28 North Broadway in Orangetown, Rockland County, New York.  She rented her home, again for $50 per month, but she was now the owner of her own beauty parlor, where she worked about 72 hours a week.
Erna was living alone because Eugene, now 22, was living nearby at the Rockland State Mental Hospital in Orangetown.  He was not a patient, but rather working 48 hours a week as a resident attendant, a government job.  Eugene had moved to Rockland in 1935 when he was 17 dropping out of high school in his junior year.
Somehow, Eugene ended up in Rolla, Missouri.  It may be that he attended the University of Missouri-Rolla (now Missouri University of Science and Technology) because he is later listed in records as Dr. Eugene R. Scholtz.  Regardless of why he was there, it was in Rolla where he married twenty-four-year-old Mary Willard on July 12, 1947.  Reverend O. V. Jackson of the First Baptist Church in Rolla officiated.
~~~
Erna retired from the beauty salon business and eventually made her way back home to Germany.  Although she was an American Citizen, she was residing abroad at Wohnstift Augustinum, an “old people’s home”, on Weitlstraße in Munich.  It was here that she died of heart failure, possibly after a heart attack, in the early evening of September 24, 1974.  She was cremated and her ashes buried in Nordfriedhof Cemetery in Munich.
Meanwhile, Eugene and Mary, who had been living in Pearl River, New York, moved to Deerfield, Florida and later to Merritt Island, near Cape Canaveral.  On Friday, October 20, 2000, both Eugene and Mary died.
~~~

There is a very interesting television show called “Who Do You Think You Are?” It traces the family history of celebrities, showing their ancestors in the context of history.  Watching it, the viewer may think that only the rich and famous have stories to tell.  However, just about every genealogist and family historian knows that everyone has a story and an interesting tidbit that makes him or her unique.  We all touch – or are touched in some way by history and we all have a story to tell.  While the story may not have a great impact on the world and it may not be something that will make us famous, it is, nevertheless, a part of us and should be told.
This young, soon-to-be-widowed German immigrant was chosen by fate to be the last person to cut the hair of a particular child, a child who happened to be the most famous baby in America and who would be the center of the world’s attention when he was kidnapped just days later.  Her brush with history, all but forgotten save for the hastily written note jotted down by the baby’s grandmother.

THE SIEGE AT JUTLAND

My new book, "The Siege at Jutland" is now available on Amazon.com; Barnesandnoble.com and iUniverse.com. 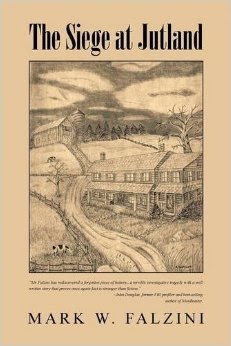 ...Meanwhile, Jim with the help of his sister, made his way into Timothy's house. There, on the kitchen floor, Beatrice and Tim cleaned Jim's wound, applied a "blue stone solution as a disinfectant and some salve" and wrapped the wound with a muslin bandage as best they could.

Unbeknownst to the Meaneys, Trooper Larsen had returned to Jutland with Corporal Matthew Daly and Trooper William Lang. Tim and Beatrice continued to tend to Jim's wound in the kitchen, re-bandaging it after Jim said he would wait until morning to go to the doctor. It was between nine thirty and ten o'clock at night when they heard a "terrific crash" at the middle door, by the dining room. Tim got up to investigate when he suddenly saw a flash of light and heard gun shots and breaking glass. Without warning or provocation, the Troopers at Lieutenant Daniel Rogers' orders opened fire on the farmhouse.

The first shots had been fired. The siege had begun!