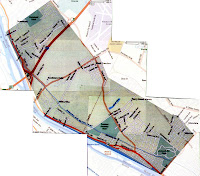 The history of the New Jersey State Police extends back 87 years to its establishment in 1921. The history of the property in Ewing Township where Division Headquarters is currently located, however, reaches back over three hundred years to the late seventeenth century when the colony of West Jersey was established and the land was still “owned” by its original inhabitants, the Lenni Lenape.

English Quakers who were men of means founded the colony of West Jersey. “They were either plain farmers (‘yeoman’) or craftsmen and tradesmen rather than gentry.” Thomas Hutchinson, the first landowner in Ewing Township, was one such Quaker. Born in 1640, he lived in the village of Beverley on the Hull River in Yorkshire, England. He married Dorothy Storr, daughter of Marmaduke Storr of Owstwicks, on March 29, 1668. [1]

Thomas bought quite a bit of land in the colony of West Jersey on July 29, 1687 his land in what is now Ewing Township was surveyed by Symon Charles for the first time: “Surveyed then for Thomas Hutchinson a tract of land lying upon ye River Delaware above the ffalls, BEGINNING at black oak marked by said river for corner...”[2]

Thomas Hutchinson’s land in the Ewing area was often referred to in early records as “Hutchinson’s Manor.” Hutchinson’s Manor consisted of 2500 acres and covered 30% of modern Ewing Township.[3] Roughly, the property’s first corner was located at the point where modern day Parkside Avenue intersects with the Delaware River. From there, the sideline continued up Parkside Avenue “84 chains” (1.05 miles) to the intersection with Parkway Avenue. The rear line continued from this second corner in a northwesterly direction for “257 chains” (3.21 miles). However, at Hillcrest Avenue, it veered south a little and crossed over at the bend at Ranchwood Drive. It continued northwest, crossing Lower Ferry Road near the railroad tracks, through the West Trenton Train Station to just northeast of Howell & Summit Avenues in West Trenton. From here, it crossed West Upper Ferry Road and Bear Tavern Road and followed along Bear Tavern to Mountain View Road. Here it turned and followed Mountain View to the river, known as “John Hutchinson’s Old Corner.”[4]

Eight months after Hutchinson’s Manor was surveyed, the most important land transaction in Ewing Township’s history occurred. On March 30, 1688 the Adlord Bowd Indian Purchase took place when a land purchase that included all of modern day Ewing Township – including but not mentioning Hutchinson’s Manor – was made for the benefit of West Jersey Governor Daniel Coxe.[5]

Daniel Coxe, who never came to America, was declared Governor of West Jersey by the Burlington Court in February 1688. Adlord Bowd was his agent in West Jersey. Bowd was dispatched to the colony where he was to “locate and take up the lands to which Coxe was entitled.” Thomas Hutchinson’s land was located entirely within the Coxe tract as is all of modern Ewing Township.[6]

A year after the purchase of land from the Indians, Thomas Hutchinson died around November 1689. Dying intestate, the inventory of his estate was made by Thomas Lambert, Joshua Wright, William Emley and John Lambert. His son and heir was John Hutchinson.[9]

April 10, 1696 marked the beginning of the break-up of Thomas Hutchinson’s original 2500-acre manor tract. It was on this date that 600 acres were conveyed to John Bryerley. The property began at the “mouth of the Shoomack Branch [the small creek near Scenic Drive on the south side of the Scudder Plantation] and extended down the river 86 chains [1.07 miles] near to present day West Upper Ferry Road, then back “into the woods” 80 chains.” [1 mile] [10]

Later, John Hutchinson conveyed to Thomas Hough 200 acres “adjoining Bryerley’s land on the northwest and extending from Shoomack Creek to the end line of Hutchinson’s Manor, at what is now Mountain View Road.” On November 14, 1699 Brearley re-conveyed to John Hutchinson 650 acres “lately appendant to ye said Mannor.” The land included much of the original 600 acres as well as additional lands to the south in the area of Wilburtha Road. The next day, November15th, Hutchinson deeded his 650 acres to John Watson and Richard Eayre. On March 21, 1699/1700, John Watson conveyed his ownership of that land to Richard Eayre. This made Richard Eayre of Burlington the non-resident owner of 810 acres along the Delaware in Ewing extending from the Southern boundary of Thomas Hough’s land (later the Scudder plantation) just below present day Bernard Drive to Andrew Heath’s plantation, at what is now Lower Ferry Road. [11]

The last recorded 17th Century transaction in Ewing Township was the deed from John Hutchinson to Andrew Heath on February 24, 1699/1700 for 400 acres out of Hutchinson’s manor. Heath’s tract adjoined Richard Eayre on the Delaware lying along and to the east of the present Reading Railroad tracks. From this site, Andrew Heath operated his ferry across the Delaware River.[12]

Although the early land purchases in the Ewing Area were in the late 17th century, European colonists did not inhabit the area until the beginning of the 18th century. The landowners, such as Thomas Hutchinson, usually lived in Burlington, Hopewell or other surrounding areas. That said it is, however, believed that Hutchinson did eventually settle on his estate thereby becoming the first settler in Ewing Township.[13]

It was from this tract that in the mid 19th century the State of New Jersey purchased farmland for use by the State Psychiatric Hospital that had recently been established just a few miles away. In 1922, a portion of this property was transferred to the Department of State Police. It was here, in the Wilburtha Section of West Trenton in Ewing Township that the State Police established their new training school for Troopers; the academy in Sea Girt where the first State Police Class had trained in 1921 was now used for Municipal Police training.

The State Police not only obtained land but also the existing farm buildings for use by the training school. “Formerly a farm, the new center required work to convert it to its new purpose, and the recruits found themselves performing a variety of chores. Roofs needed repair, gravel was spread in the stables and roadways, and all hands found themselves wielding paintbrushes.”[16]

Today, the land continues to be used by the State Police. In 1947 the new State Constitution downgraded the Department of State Police to a Division under the Department of Law and Public Safety. State Police Headquarters was then moved from its original location, across the street from the State Capital Building on West State Street, to its current location. Eventually, the Training School was transferred back to Sea Girt, where it remains to this day.

The State Police “skyline” in Wilburtha has changed drastically since 1922, even more so since the Lenape roamed there. While seven of the buildings erected in the 1920s are still utilized by State Police administrative offices, a dozen or so modern buildings now surround them. The most recent addition came in January 2007 when the Regional Operations Intelligence Center opened. The ROIC (pronounced “rock”) serves as the nerve center of New Jersey’s homeland security, crime fighting and emergency response efforts.

The New Jersey State Police was founded in 1921 as a rural police force, established to protect the farmers who worked the land. And it is through its own ties to the land it now occupies that the heritage and history of the New Jersey State Police reaches beyond the 20th Century and all the way back to era of Hutchinson’s Manor and the Lenni Lenape Indians over 320 years ago.

6 ibid. Pg. 19-20. See also “The Coxe Affair” for a discussion about this controversial land purchase.

13 It should be noted that the area was not known at this time as Ewing Township. Originally the area was part of Hopewell Township, Burlington County. In 1713, Hopewell Townshop was removed from Burlington County and became part of the newly established Hunterdon County. From 1719, when the City of Trenton was founded, until 1834 the area was named Trenton Township. On February 22, 1834 the named was changed to Ewing Township in honor of Charles Ewing, the late Chief Justice of the New Jersey Supreme Court. It became part of Mercer County after its establishment in 1838.