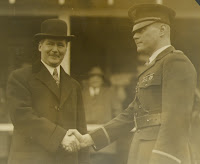 on reads, “1926 – Reappointment for 2nd term as Superintendent Colonel H. Norman Schwarzkopf #1 with Gov. A. Harry Moore.” This, it turns out, is incorrect.

While the photo does indeed show New Jersey Governor Moore and State Police Superintendent H. Norman Schwarzkopf, the date and event are not accurately described. The photograph is actually one of two known extant photographs taken on January 18, 1928 at an award ceremony for Troopers Charles Schwartz #262 and James McCormick #225. They, along with Keeper James Quigley of the Bronx Zoological Garden, received medals of valor from the Governor.

The three men earned the medal of valor when they saved the life of Titusville, New Jersey resident Louis Guarniere. Mr 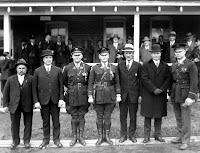 . Guarniere, who had been bitten by a rattlesnake, was near death and the only anti-venom serum available was over 80 miles away at the Bronx Zoo.

The State Troopers raced to the New York border where Zookeeper James Quigley met them with the antidote. The Troopers then sped across the State on their motorcycles “at a dangerous speed” through heavy traffic with the life saving serum to St. Francis Hospital in Trenton. The doctors administered the serum and Mr. Guarniere made a full recovery.

Governor Moore praised the Troopers, declaring that he was “proud of the State Police of New Jersey” and that he felt “that the State is safe in their hands because they embody all of the finest things that New Jersey stands for.”[1]

During the 1920s and 1930s, and even into the 1940s, New Jersey was still a very rural State and bites by these deadly vipers were not too uncommon. The State Police even received training in their Academy on how to deal with snakes and, in 1930, the State Police provided supplies of “snake serum” to hospitals and pharmacies in 23 communities around the State.[2]

Even with the availability of the serum throughout the State, the Troopers still had to come to the rescue of some snakebite victims. For example, in August 1934, Sergeant John Crawford #256 “traveled forty times on a motorcycle in less than forty-five minutes” to deliver serum to the Paul Kimball Hospital in Lakewood. Twenty-two-year-old Eugene Beyer was walking through a field near his Lakewood home when he was bitten in the leg by a rattlesnake. His condition was not as serious as Mr. Guarniere’s – after he was bitten, he “walked to his automobile and drove to the hospital where he received emergency treatment until the serum arrived.”[3]

Three years later, the State Police once again had to rush serum to a victim of snakebite. In August 1937, Troopers “raced fourteen and a half miles in fifteen minutes from the Netcong barracks to Newtown Memorial Hospital.”[4] Ralph Schmidt, a 16-year-old Boy Scout was in critical condition after having been bitten in the leg by a rattlesnake near Camp Mohican in Blairstown, New Jersey.

Although rattlesnakes are usually thought of as being found only in the desert southwest, the Timber Rattlesnake (Crotalus horridus) is one of two deadly snakes that are native to New Jersey, the other being the infamous Northern Copperhead (Agkistrodon contorix mokasen).[5]

The Timber Rattlesnake was at one time thriving throughout New Jersey. However, a loss of habitat and “wanton killings” has reduced its population to the point that it has been listed by the State of New Jersey as an endangered species.[6]