On March 24, 1932, the superintendent of the New Jersey State Police, Colonel H. Norman Schwarzkopf, dispatched his deputy, Major Charles Schoeffel, to Europe to investigate any possible foreign connection to the Lindbergh kidnapping. The intention was for him to secretly meet with investigators at Scotland Yard and other European investigation agencies and show them Photostatic copies of the various ransom notes received by Colonel Lindbergh and his representatives. He was also to show them photographs of the Lindbergh Estate and other evidence in hopes of receiving any
“advice, suggestions or criticism concerning the facts in hand.” He sailed first for London, England, on March 28th aboard the RMS Mauritania. From London, he continued on to Paris, Berlin, Vienna and Rome.

Although this was supposed to be a secret mission, the press immediately knew Schoeffel was heading abroad. On April 1st, he received a telegram from the editor of the Daily Herald in London saying that “New York messages state you coming England investigate Lindbergh baby” [sic] and further requesting details of his plans. “This was followed by a visit from one of the women passengers who introduced herself as a sister of the editor of the Universal News, Inc. at London. She stated she had a cable which advised her I was on board and requested her to obtain an interview with me as to my plans.”

Major Schoeffel did not intend to grant anyone an interview. He disclosed his secret identity to the ship’s captain and asked him to send “a coded message to Colonel Schwarzkopf explaining the fact that I had received the telegram stated above and requesting what attitude to take towards the press.”

The “code” used by Schwarzkopf and Schoeffel was a simple substitution cipher, similar to the “Crypto-quips” found in many daily newspapers today. In this kind of cipher, replacing it with a different letter encrypts each letter of the alphabet. “The substitution is fixed for each letter of the alphabet. Thus, if "a" is encrypted to "R", then every time we see the letter "a" in the plaintext, we replace it with the letter "R" in the ciphertext.”(1) This kind of cipher traces back to the days of Julius Caesar. In his case, Caesar simply shifted the letters to the right by three. So, A became C; B became D andso on. In this case, “CAESAR” would then be written as “DCHVCU”.

The cipher employed by Colonel Schwarzkopf and Major Schoeffel randomly reassigned letters to replace the standard alphabet. In this case, A became C, B became J, and C became B, and so on. Each had a copy of the “key” that would allow him to encipher and decipher messages. When sending a telegram, Schwarzkopf or Schoeffel would first write out then replace the letters of the original “plaintext” message with the cipher. This would then be sent overseas by telegram. If the press intercepted it, it would take them too long to decipher the message for it to be of any use to them.

Charles Lindbergh also used a simple substitution cipher for his coded messages to and from Schwarzkopf and others working on the investigation. The difference was that Lindbergh used numbers instead of letters. But he also added a bit of a twist.

The simplest form of numeric substitution simply replaces a letter with its numbered position in the alphabet. For example, A is the first letter of the alphabet so A = 1. B is the second letter, so B = 2; C = 3; D = 4; E = 5 and so on. In this version of the numeric cipher, LINDBERGH would be written as 12 9 14 4 2 5 18 7 8. The twist that Lindbergh added was that, rather than using the numerical value of the plaintext letter, he used the numerical value of new letter assigned by Schwarzkopf’s cipher. It
sounds confusing but it is actually quite simple. 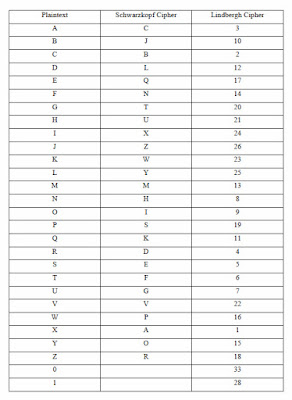 The following is a sample of a coded message that was written by Lindbergh.  Note: the dashes separate words and the periods separate individual letters(2):

Whether or not Lindbergh actually used his version is unknown. And there is only one telegram known to still exist that was encoded using the Schwarzkopf–Schoeffel Cipher. Major Schoeffel sent it to Colonel Schwarzkopf while in London. The message simply states:

During the early investigation of the Crime of the Century, the movements of the State Police detectives were under great scrutiny. While not protecting diplomatic or military secrets, the codes employed by Lindbergh and the State Police were needed to keep the voracious appetite of the press for information in check.