The Lindbergh Kidnapping Case is full of baffling aspects, not the least of which was the timing of the payment of the ransom money.  Could the phase of the moon provide some insight into why it took a month for the ransom to be paid?
When the Lindbergh Baby was kidnapped on March 1, 1932, a ransom note was left in the nursery demanding payment of $50,000.  It also stated that, “After 2-4 days we will inform you where to deliver the money.”   Because Charles Lindbergh did not open the note as soon as he found it and instead waited for the police to arrive, it was too late to heed the instructions of the kidnappers not to make “anyding public or for notify the Police.”
On March 4th, a second ransom note arrived at the Lindbergh Estate.  It scolded Lindbergh for not following their instructions:  “We have warned you note to make anyding Public also notify the Police now you have to take the consequences.  ths means we will holt the baby untill everyding is quiet.  We can note make any appointment just now.”  It also increased the ransom to $70,000.
The following week, the infamous Bronx blowhard Doctor John F. Condon, aka Jafsie, was brought into the story as the intermediary.  An editorial had run in the Bronx Home News stating that Condon wanted to act as go-between[1].  He received a note from the kidnappers accepting his offer and instructing him to place advertisements in the classified section of the newspaper.  He would then receive further instructions through the mail.
A ransom note was delivered to him on March 12th.  It instructed him to meet with a member of the kidnap gang that evening at Woodlawn Cemetery in the Bronx so that the ransom could be paid.  However, when Condon met with a man who was later referred to as Cemetery John, Condon refused to pay, instead demanding further proof that he was in fact dealing with the actual kidnappers.
A few days later, on Wednesday, March 16th, Doctor Condon received what was accepted as the baby’s Doctor Denton sleeping suit.  Convinced now that they were dealing with the actual kidnappers, it was decided to pay the ransom.  However, it would be another two weeks before this was done!  Why the delay?
Many people mistakenly accuse Lindbergh as causing the delay, saying that he refused to pay the ransom until he was convinced to do it for the sake of his wife’s health or because the kidnappers threatened to increase the ransom to $100,000.  A closer look reveals the opposite.  It was not Lindbergh that was delaying, but the kidnappers!
The day after the sleeping suit was delivered, Condon again began placing advertisements in the paper.  “Money is ready. No Cops, No Secret Service. No Press.  I come alone like last time.  Please Call.  Jafsie.” ran on March 17th.    “I accept.  Money is ready. John your package is delivered and is ok. Direct me.  Jafsie.” ran on the 18th and 19th.  Finally, on March 21st, a note was received from the kidnappers.  However, there are no instructions for delivering the ransom!  It was a long note that really said nothing:

Dear Sir:  You and Mr. Lindbergh know
ouer Program.  If you don't accept
den we will wait untill you
agree with ouer Deal, we know
you have to come to us any way
But why shoul'd Mrs. and Mr.
Lindbergh suffer longer as necessary
We will note communicate with
you or Mr Lindbergh until you write so
in the paper.
We will tell you again; this kid
naping cace whas prepared for a
yaer already so the Police would
have any look to find us or the child
You only puch everyding further out
dityou send that
little package to
Mr Lindbergh? it contains
the sleepingsuit from the
the baby is well.         Baby.

(on the other side:)

What was the point of this note, other than to “remind” Lindbergh that the kidnappers were still out there?  Doctor Condon continued to place his ads in the paper.  Four more, posted on March 22nd through the 25th, were more extensive than previous ones:

Thanks.  That little package you
sent was immediately
delivered and accepted as real article.
See my position.  Over 50 years in
business and can I pay
without seeing the goods?  Common sense
makes me trust you.  Please
understand my position.  Jafsie.

The plea was met by a lingering silence by the kidnappers.  Three more ads were placed on March 26th, 27th and 28th:

Money is ready.  Furnish simple code
for us to use in paper.  Jafsie.

On March 30th, the kidnappers finally sent another note.  But once again, there are no instructions.  The note does, however, set a time frame for the payment of the ransom.  Lindbergh was told that if the ransom was not paid by April 8th, the ransom would be increased to $100,000.
For the next two days, March 31st and April 1st, “I accept.  Money is ready.  Jafsie” ran in the newspaper.  On April 1st, another ransom note arrived, this time with instructions:

Dear Sir:  have the money redy by saturday
evening.  we will inform you where
and how to deliver it.  have the money
in one bundle we want you to put
it in on a sertain place.  Ther is
no fear that somebody els will
tacke it, we watch everything
closely.  Pleace lett us know if
you are agree and ready for action
by saturday evening. --if yes--
put in the paper
Yes everything O.K.
It is a very simble delivery but we
find out very sun if there is any trapp.
after 8 houers you gett the adr; from
the boy, on the place
you finde two
ladies.  there are
innocence.

(on the other side:)

If it is to late to put it in
the New York American for saturday
evening put it in New York Journal.

The ransom was finally paid on Saturday, April 2, 1932 – just a month from the night of the kidnapping.  Why did the kidnappers delay the payment of the ransom? We may never know the answer for sure, however one theory could be that it was based on the phase of the moon.
It is not known for sure why the kidnappers chose March 1932 to commit their crime, but working with the “moon theory” March 1st was the opportune time to kidnap the child.  Why?  It was because the phase of the moon at that time was a “waning crescent” and only 32% visible making for an all-important dark night.
With the kidnapping occurring on March 1st, you can then factor in the “3-4 days” mentioned by the kidnappers in the Nursery Note as to when instructions for the ransom payment would be provided.  That brings us to Friday March 4th and Saturday March 5th.  The moon at this point is only 8% and 4% visible, respectively – in other words, no moon.  A dark moonless night is just what the kidnappers would want for the night of the ransom drop.  But there is a problem.  Lindbergh did not follow instructions and he called the police!

“We have warned you note to make anyding Public also notify the Police now you have to take the consequences.  ths means we will holt the baby untill everyding is quiet.”

The kidnappers need to come up with another plan.  Suddenly, on March 9th Doctor John Condon is on the scene as the go-between.  A meeting is arranged with him and one of the kidnappers in Woodlawn Cemetery on March 12th.  The kidnappers are expecting the ransom to be paid.  The phase of the moon is now a “waxing crescent” – it’s getting brighter – but it is still, at this point, only 23% visible.  It would still make for a very dark cemetery.  But there is now another problem.  Condon refuses to pay the ransom that night!
It is three weeks before Lindbergh is given new instructions for paying the ransom.  The sleeping suit does not arrive until March 16th.  Now the moon is working against the kidnappers.  Each night, it is getting brighter as it approaches the Full Moon.  Eventually, the kidnappers tell Lindbergh the ransom must be paid by April 8th and arrangements are made for it to be paid on April 2nd.  Why those two dates?  The moon on April 2nd is once again a waning crescent and only 12% visible.  On April 8th, it is a “waxing crescent” (that is, getting fuller) but still only 6% visible.  Both are very dark moons, and therefore very dark nights.  After April 8th, the next opportunity for a “dark night” is not until the end of the month, around April 29th or 30th and after that, not until the middle of May.  The kidnappers must get the ransom no later than April 8th, hence the threat that Lindbergh would have to shell out $100,000 – twice the original ransom – if he doesn’t do what he is told.
Of course, the kidnapping could have occurred before March 1st.  Nevertheless, if the kidnappers were waiting for a dark, moonless night to kidnap the child from Hopewell with a dark moonless night 3-4 days later, they had a limited number of opportunities to do so.  The Lindberghs only began staying in Hopewell on the weekend of October 31, 1931.  They stayed twelve weekends, and of those twelve, only six had a dark moon.  Of those, only four were ideal: November 7, 1931, December 5, 1931, February 6th, 1932 and February 27th, the weekend of the kidnapping.[2]
While the phase of the moon would have been known to anyone with access to the Farmer’s Almanac, the “moon phase theory” shows that the kidnapping of the Lindbergh Baby took forethought and careful planning and could not have been pulled off on a whim. 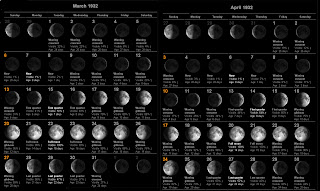 [1] See, Enter: Jafsie!  (http://www.njspmuseum.blogspot.com/2010/02/enter-jafsie.html)
[2] The other weekends would not work.  November 14th and January 6th, the moon was too close to entering the full moon phase, so there would be no time for a ransom drop.  January 2nd would have worked, except that the house was too crowded – Betty Gow and Red Johnson joined the Lindberghs and the Whateleys in Hopewell.  For almost the entire month of December 1931, Anne was ill so they stayed in Englewood.
[3] Moon calendar: www.calendar-12.com/moon_calendar/1932/march  and www.calendar-12.com/moon_calendar/1932/april
Posted by Mark W. Falzini at 3:49 PM