Dining With Our Ancestors: A Tale of Gastronomic Genealogy

An interesting aspect of genealogy is learning the stories of the foods that our ancestors ate. The "old family recipes" that are still cooked or baked today help us to connect with our past. Sometimes just the name of a recipe can be a catalyst for a family discussion. Often, we honor family and friends by naming recipes after them. Just who was "Aunt Martha" of "Aunt Martha's Old Fashioned Salad Dressing"? And what about "Mrs. Walker" who made those delicious potatoes? Was she a good family friend? "William's Fritters" were called that because they were your great grandfather's favorite.

Sometimes a recipe harkens to a specific time or event, such as "Watergate Cake", a pistachio cake so called because it was first made while the infamous Watergate scandal in the 1970s was on going. And sometimes a recipe was developed because of economic conditions or shortages of ingredients, like "Mock Apple Pie" that is not made with apples but rather Ritz Crackers.

All of these scenarios allow us to develop a deeper connection to our past and to the lives of our ancestors on a personal level. They allow us to have a glimpse into their world and grant us the opportunity to remember and honor them. Most of all, it allows them to live on through the food we eat.

The recipes that follow hearken back to the 19th and 20th centuries. They connect me with my family but also with two distinct periods of time that they lived through.

One branch of my family, the Kale Family, has been in the United States since before the Revolution. my great great great grandfather, Richard Stockton Kale I, was born in 1808. His parents, William and Mary Kale are mentioned in Burlington County, New Jersey, deeds as early as 1801.

In 1835, Richard married Anna Sever. Known as "Gramma Kale", Anna's recipe for Applesauce Cake dates back to 1850 and is the oldest recipe in our family.

The Kales were farmers in Burlington County. The Applesauce Cake, and an Eggless Devil Cake, were developed because there were times when the chickens on the farm did not lay eggs. Even as recently as the 20th Century, "if the chickens weren't laying eggs, we didn't go to the store to buy them. We made the applesauce cake and Devil's Food Cake because they didn't use any eggs. So, we always were able to have cake."[1] 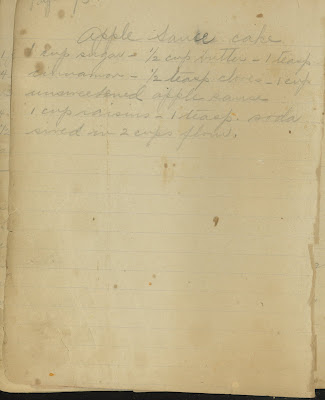 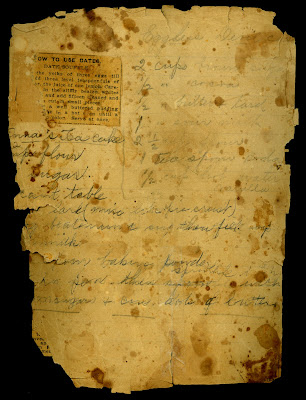 Eggless Devil Cake[3]
Mix all of the ingredients together, pour into an 8-inch round pan and bake at 350*F for 35 minutes or until a toothpick inserted in the center comes out clean.

In my great grandmother's cookbook is a fritter recipe. Fritters are simply pieces of dough that are sometimes plain and sometimes filled with meat, fruit or vegetables and then fried. A note in the margin, "Dad loves these", indicates that they are named after my great grandfather, William H. "Dad" Kale. 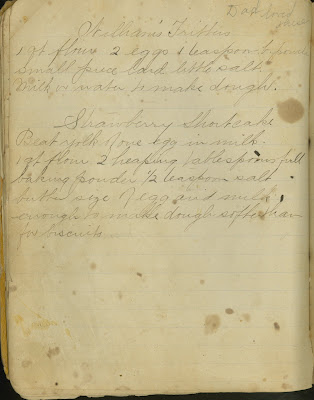 William's Fritters
Mix the above ingredients with a little milk or water to make a dough and fry in oil.

Reading family correspondence and listening to older family members reminisce about the family inevitably lead to a mention of "College Cake". The origin of the name is unknown, but we do know that the cake came from "Aunt Mary Stout." She was not a blood relative, but rather a close friend of the family and she lived in Mercerville, New Jersey. Her "College Cake" was a popular cake among the Kales, especially for birthdays and holidays, but it stopped being made sometime in the late 1940s.

No one knows why the family stopped baking College Cake, however it may not be much of a coincidence that, in 1947, the first Betty Crocker Cake Mix hit the shelves, followed by Pillsbury in 1948 and Duncan Hines in 1951. The era of baking cakes from scratch - especially one as time consuming as College Cake - was quickly coming to an end.[4]

The College Cake was last mentioned in a letter written February 20, 1948 by my grandmother, Julia Kale, to her mother and father-in-law. Julia was living in Germany at the time with my grandfather, Major Samuel S. Kale and their children while he was stationed in Würzburg with the Army of Occupation. Julia wrote her in-laws about dinner the previous Christmas, in 1947:

We had supper -- as usual on Christmas -- nut bread, cheese,
cookies, a cake, a fruit jello (without whipped cream or ice
cream) and fruitcake. No fruit but oranges & apples...We
seemed to have plenty of cookies and I made several new
kinds. We couldn't get chocolate chips, walnuts or fresh
coconut -- but we did have Nestle bars to cut up for cookies
& dehydrated coconut. Why I even made a college cake
and the marshmallows coming in as they did allowed us to
have sweet potato & marshmallow casserole. Thanks for
them.[5] 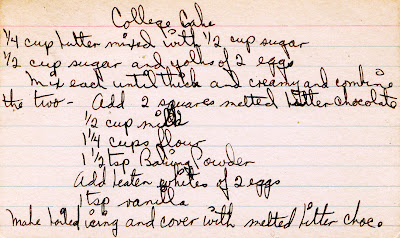 College Cake
Cream 1/4 cup butter with 1/2 cup sugar.
Cream 1/2 cup sugar and the yolks of 2 eggs.
Mix each until thick and creamy and then combine the two.
Add melted butter chocolate.
Add milk and mix.
Add flour and baking powder and mix.
Whip egg whites just until frothy and add to mixture.

Line the bottom of an 8-inch round pan with parchment or waxed paper. Pour batter into prepared pan and bake at 350*F for 35 minutes or until a toothpick inserted in the middle comes out clean. Let the cake cool completely in pan before turning out. Frost with boiled icing and once that sets cover with melted bitter chocolate.

Boiled Icing is an old fashioned, quintessentially American icing from the "turn of the century". It is reminiscent of marshmallows and is surprisingly very easy to make.

Boiled Icing
Combine the sugar, corn syrup and the water in a quart pot.
In a separate mixing bowl, whip the egg whites until they are stiff and hold a peak. Set aside.
Bring the sugar mixture to a boil and then continue to boil until it reaches 238*F [some recipes say it should go as high as 260].
Pour the hot syrup over the egg whites in a steady thin stream, beating constantly.
Add the vanilla and beat until cool and of spreading consistency. If the icing does not seem stiff enough, beat in 2 or 3 tablespoons of confectioners sugar 1 tablespoon at a time until it is stiff enough to hold its shape. Spread over the cake and let set. 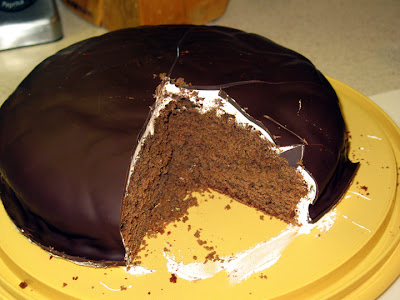 Another recipe dating from this time-period is not actually a family recipe. But for me, it has great historical family significance because of where and when - and by whom - it was made.
My grandparents and their children were in Germany from 1946-1949. My grandfather was in charge of several Displaced Persons (DP) camps in northern Bavaria and he served as the liaison between the American Army and the United Nations.
Because my grandparents had a large family - seven children - the army occupied a very large house with 24 rooms for them on the outskirts of town. Sam hired DPs to work for him and to help Julia care for both the large house and the two youngest children. "Kilas was my father's driver. Kiliani was his wife; she was the maid. They were from Latvia. 'Washlady' [Mrs. Glassman], who was also Latvian, did the wash and Louisa, a Lithuanian, was our cook. 'Little John was our first gardener."[6]
One of the "snacks" that Louisa would make for the family was something she called "Speck Kuchen." This translates from German as "bacon cake" but this is not what she actually made. It turns out that her recipe was for Speka rausi, a very popular Latvian dish. These are very small bread rolls that are stuffed with smoked bacon and onion. cooked in a very hot oven, the bacon fat renders, adding flavor to the bread. "When Louisa would make these, all of us kids would surround her when she took them out of the oven. I don't think very many of them ever made it from the oven to the counter!"[7] These are delicious and seventy years later, when I make them for my mother, still not many make it from the oven to the counter!
I grew up hearing the stories of their time in Occupied Germany and I was very excited when I stumbled upon Louisa's handwritten recipe for Speck Kuchen several years ago in my grandmother's recipe collection. I make them a few times every year. They are my way of connecting not only with a period in history that has long fascinated me but these little rolls allow me, all these years later, to share in and connect to a unique family experience.
The following recipe for Speck Kuchen is copied exactly as Louisa wrote it in the 1940s. She never made it with peppers and this can be made with any kind of bread dough you wish to use. You can even use frozen bread dough from the grocery store. Also, these should be made very small, no bigger than your thumb.
Speck Kuchen
Warm the milk, melt the salt in the milk, join the flour but don't make the dough too hard then join the yeast, but first melt the yeast in a bit of water. At last join melted shortening, knead thoroughly until the dough doesn't stick by the hands. Then put into a warm place and let it rise about 1 to 1-1/2 hours.
For Filling
Cut the bacon into small pieces, cut very small the onion, then mix with the bacon, onion and ground peppers.

Then take the risen dough, make it thin, put on about a teaspoon from the bacon, cover the bacon with the other side of the dough, take a glass and cut out. Put on a pan, let rise a little. Glaze with beaten egg with a brush, put into a hot stove and bake until they are yellow-brown, about 18-20 minutes.

When I mentioned to a friend that I found a recipe for "College Cake" and that I was making it for the first time since it was last made in the 1940s, he was amazed. Gregg said that "when preserving history, [people] overlook something as simple as a recipe. They get lost...they can become as extinct as the Dodo." Sadly, this is very true.
Cooking historical recipes, as Chef Walter Staib does on his PBS series, "A Taste of History", or family recipes like those I highlighted here, brings our past to us on a personal level. It allows us to connect to people, places or events that were just names on a family tree or in a history book.
Maggie Black says in "A Taste of History: 10,00 Years of Food in Britain", it is through recipes such as these that each new generation is "...able to share in the traditions of cooking and eating [that were] enjoyed by our ancestors."
Eating food keeps us alive. Eating the food our ancestors ate keeps them alive, too.
Guten appetit!

2 Some of these images are from my great grandmother, Mary Grace Kale's "first cookbook", a handwritten collection of recipes that range from cakes to cures for colds. It was given to me for safe keeping by my cousin Momi Naughton. It has been digitized and is available to anyone in the family who wishes a CD copy.

3 Most of the recipes in my great grandmother's cookbook only list the ingredients and don't tell you what to do with them once they're all mixed together! It was assumed that the person using the cookbook already knew the basics of how to bake a cake.

4 http://www.foodtimeline.org/foodcakes.html#aboutcakemixes (as of 14 February 2012). Thanks to my sister, Beth Larkin, for first suggesting that this could be the reason for the cake no longer being made.