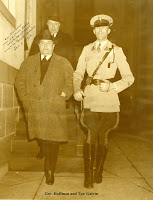 On February 13, 1935 Bruno Richard Hauptmann was found guilty of the kidnapping and murder of Charles A. Lindbergh, Jr. New Jersey Governor Harold G. Hoffmann did not accept that Hauptmann was the sole perpetrator of the “Crime of the Century” and ordered the New Jersey State Police to re-open their investigation. Convinced that the State Police were trying to frame Hauptmann, the Governor also conducted his own investigation, generating over 20,000 pages of documents. Hoffmann was unsuccessful in his attempt to help Hauptmann and on April 3, 1936 he was executed at the Trenton State Prison.

On June 30, 1936, Colonel H. Norman Schwarzkopf’s third five-year term as Superintendent of the New Jersey State Police came to an end. He was first appointed in 1921 by Governor Edward I. Edwards to establish the New Jersey State Police and to serve as its first superintendent. He served under five governors of both political parties during his tenure.

Governor Hoffmann decided not to re-appoint Schwarkzopf as Superintendent. Instead, he appointed his friend and political ally, Colonel Mark O. Kimberling, as the second State Police Superintendent. Kimberling originally held the title of Deputy Superintendent under Schwarzkopf from 1921 until he resigned on June 30, 1929. He later became the Principal Keeper of the Trenton State Prison and was in charge of Richard Hauptmann’s execution in April 1936. He took over as superintendent on June 17, 1936.

The publicity of Hoffman’s involvement in the Lindbergh Case ruined his political career. He was not re-elected and never went on to national office. He served in World War II in the Army Transport Command and after the war was appointed to mid-level positions in state government.

Eighteen years after being dismissed from office, Colonel Schwarzkopf (by now a Brigadier General in the United States Army) returned to state service as an administrative assistant to the Attorney General. In March 1954, he was directed to lead an investigation into the affairs of the Division of Employment Security whose director had been suspended on charges of official misconduct. The director in question was former Governor Harold G. Hoffmann. He was suspended on March 18, 1954 and State Troopers were sent to his offices to secure files for Federal and State investigators.

When Schwarzkopf was directed to investigate former Governor Hoffman, he knew full well that there would be questioning of his objectivity and accusations of vengeance. It never came to that. On June 4th, the former governor was found dead in his New York City hotel room, the apparent victim of a heart attack. He left behind a letter to his daughter in which he admitted to embezzling $300,000 from the South Amboy Trust Company where he was an officer during the 1920s. He claimed that he had used the money to fund his Congressional campaigns. Schwarzkopf’s investigation further revealed evidence of payroll padding, improper use of state employees and equipment and payment for purchases that were never delivered.

Schwarzkopf versus Hoffman. Yet another example of the many tragic ironies of the Lindbergh Kidnapping Case.
Posted by Mark W. Falzini at 1:49 PM