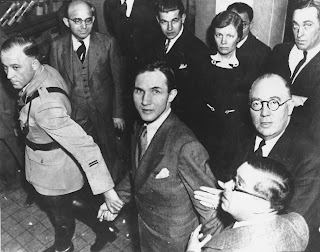 The photograph attached to this article is one of the most popular from the Hauptmann Trial. It shows New Jersey State Trooper Hugo Stockburger leading Bruno Richard Hauptmann into the courtroom in Flemington, followed by his attorney Edward J. Reilly. Behind him is Deputy Sheriff Hovey Lowe.

Take a close look at the photo. Until recently the only bit of trivia attached to this photograph was the fact that Stockburger is leading Hauptmann by the wrist – without using handcuffs. When asked about this, Stockburger explained that this was because of Walter Winchell.
In the 1930s and 1940s, Winchell was a very influential and powerful journalist. He had a syndicated newspaper article as well as a radio program. He was a close friend with both Owney Madden – New York’s top mafia boss – as well as J. Edgar Hoover. A mention in his column or radio show could make or break someone.
According to Stockburger, Hauptmann was led into the courtroom on the first day of the trial in handcuffs. Winchell saw this and was outraged. “This is America! Here we are innocent until proven guilty. Take those handcuffs off!”
And so they did. From that point on until his conviction, Hauptmann was led from his jail cell to the door of the courtroom in handcuffs. They were then removed and he was taken by the wrist and led into the courtroom. “It was ridiculous,” said Stockburger. “All he had to do was snap his arm down and he could break free, not that he could go anywhere.”
Until recently this was all we knew about the photograph. But there is another story to be told. Take another look at the photo. Notice that everyone is all looking in the same direction, towards the camera. That is, all except for one. The guy standing in the back with the glasses wearing a suit jacket and vest is not looking at the camera; rather he is looking at Hauptmann. Why? Old timers from Flemington already know the answer to this, or at least they should.
This gentleman is Benjamin “Ben” Karrow. He had the tailor shop on Main Street in Flemington and owned the only steam press in Hunterdon County at that time. According to his granddaughter, New Jersey State Assemblywoman Marcia Karrow, every night Ben would go to the Flemington jail and pick up Hauptmann’s suit to take to his store to press it. He would then return it the next morning and dress Hauptmann. He would be in the halls as Hauptmann was taken into court, so he ended up in almost every photograph with him. In this photo he can be seen checking out his work!
As the trial dragged on, reporters such as Winchell needed more clothes. They asked Karrow if he could help them out. He sent his son, Solomon “Sol” Karrow to Manhattan to buy suites for the reporters and this is how the new family business, “Karrow Menswear” got started.
Born on August 8, 1894 Ben Karrow was known around town as a very generous philanthropist and during the Great Depression he let families buy clothes on credit. He helped out the families in rural Hunterdon County as much as possible and was greatly admired by just about everyone in the county.

An Orthodox Jew, he sold the first Israel Bonds in the 1940s and was one of the first Americans invited to the newly created state of Israel in 1948, flying there with James Grover McDonald, the first American Ambassador to Israel.When Ben died in May 1982 he was buried with a Torah, one of the greatest honors for an Orthodox Jew and an honor well deserved by this generous and much loved man.
Posted by Mark W. Falzini at 12:01 AM