Chief George W. Bier was the operator of the agency. In 1930, his office was based at 319 Twentieth Street in West New York, New

Jersey. The Bergen County headquarters of the organization where a gentleman named Fred N. Munroe worked as Deputy Chief was located at 292 Main Street in Hackensack. At one time the office was also located at 278 Ross Avenue in Hackensack. 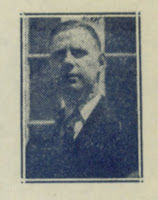 rt-time basis. His "day job" was working in the photo-engraving department of the New York Daily News. Apparently, he was a decent detective because on March 19, 1932 "...he arrested two men in Hackensack on a charge of counterfeiting...[he] has a long record of arrests to his credit." (NY Daily News, "News Pix" page 6. April 1932). Deputy Chief Munroe also worked on the Lindbergh Kidnapping Case in March 1932, providing data on various suspects to the New Jersey State Police.

A few years prior to Munroe's his involvement in the Lindbergh Case, Chief Bier was arrested. According to a July 20, 1930 New York Times article, Bier surrendered to authorities at the Hundson County Prosecutor's Office "...in response to a warrant charging him with obtaining money under false pretenses."

h "New Jersey State Secret Service". Allegedly Bier was selling these badges for more than $150 along "with the promise of immunity of police action."

Michael Thuz and Joseph Hohol, who had been arrested for violation of Prohibition laws, both identified Bier. Thurz claimed that Bier had sold him a New Jersey State Secret Service badge in December 1929 for $150. "Hohol said he had received a badge from Bier for 'favors.'"

As of now, nothing more is known about this private detective agency. How long into the Depression Decade of the 1930s it lasted and how many legitimate cases they investigated continues to be a mystery.
Posted by Mark W. Falzini at 3:28 PM