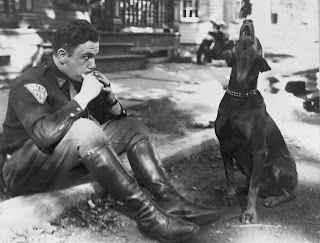 “Doughboy” was more than just a mascot; he was an honorary Trooper and considered as much a member of the New Jersey State Police as any member of the K9 Unit is today. He was the “fifth member of the State Police force” at the Columbus Station. “When Sergeant Haussling left here on calls the dog always went with him. When a prisoner got rough, Doughboy also would get in the melee.”
Like many of the early New Jersey State Troopers, Doughboy was an immigrant from Germany. He was born during the First World War and was originally owned by a German officer. One night he wandered over “No Man’s Land” to the American trenches. There, Captain Robert G. Hamilton of the American Expeditionary Force adopted him, eventually bringing him home to New Jersey.

In 1921 Robert Hamilton and Doughboy took rôles in the silent film Ten Nights In The Bar Room. Released in December 1921, the film was directed by Oscar Apfel. Based on Timothy Shay Arthur’s novel of the same name, the movie was a propaganda film supporting the Temperance Movement. In it, a mill owner loses his mortgage, and the life of his daughter, because of his drinking problem. Hamilton had a bit part as the “foreman of the mill”, and Doughboy role was to “howl when the drunkard’s daughter died. To get Doughboy to howl, they played a mouth organ just out of range of the camera.” 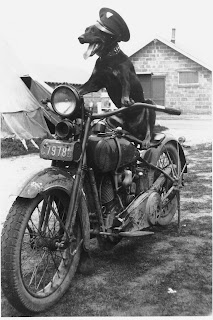 the State Police when Hamilton enlisted in 1922 as a member of the 2nd Class. Interestingly, Hamilton enlisted with the rank of Captain. He brought Doughboy with him to Wilburtha (West Trenton). It was while he was stationed at Wilburtha in 1925 that Doughboy learned to ride a motorcycle. Later, he and Hamilton were transferred to the barracks in Columbus, New Jersey. When Captain Hamilton retired in 1927, he left Doughboy in the care of the Troopers stationed there.

Doughboy never learned to like the “mouth organ” as can be evidenced by the now famous photograph of him “singing” as Trooper William O. Sawyer plays his harmonica. While Sawyer insisted Doughboy was trying to sing along, his fellow Troopers asserted that he was “trying to ‘howl down’ the Trooper in order that the ‘shame’ of his playing ability may not be broadcast over the countryside.’”

On September 4, 1932(?), Doughboy became ill. His fellow Troopers tried to nurse him back to health and even administered medicine to him, but on the morning of September 6th they awoke and found he had died during the night.

Doughboy was granted a full State Police funeral. He was transported to Wilburtha Barracks, present day Division Headquarters, where he was buried with military honors, “wearing a blanket bearing the initials of the New Jersey state police – ‘N. J. S. P.’”